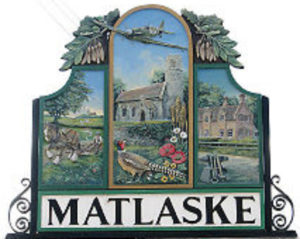 Matlaske had an entry in the Domesday Book of 1085 and the name comes from Old English and means “Ash tree where meetings are held”.

Saint Peter’s church dates back to the Saxon period. It has a round tower of Norman origins.

Barningham Hall is a Grade 1 listed Jacobean house built in 1612 for Sir Edward Paston. The grounds where landscaped by Humphrey Repton in the early 1800’s.

Matlakse School was opened in 1876 and was closed in 1964. It is now private residences.

RAF Matlaske was opened in 1940 with had two grass runways housing spitfires from No 27 squadron. In 1942 the Westland Whirlwinds from 137 squadron moved to RAF Matlaske. In 1944 there were Mustang III’s from No 150 Wing of the Second Tactical Airforce and Spitfires from 229, 453, & 602 squadrons. The airfield continued to be used until April 1945.

This website uses cookies to improve your experience while you navigate through the website. Out of these, the cookies that are categorized as necessary are stored on your browser as they are essential for the working of basic functionalities of the website. We also use third-party cookies that help us analyze and understand how you use this website. These cookies will be stored in your browser only with your consent. You also have the option to opt-out of these cookies. But opting out of some of these cookies may affect your browsing experience.
Necessary Always Enabled
Necessary cookies are absolutely essential for the website to function properly. This category only includes cookies that ensures basic functionalities and security features of the website. These cookies do not store any personal information.
Non-necessary
Any cookies that may not be particularly necessary for the website to function and is used specifically to collect user personal data via analytics, ads, other embedded contents are termed as non-necessary cookies. It is mandatory to procure user consent prior to running these cookies on your website.
SAVE & ACCEPT